Making a Zoom Panic Switch with the Adafruit Trinket M0 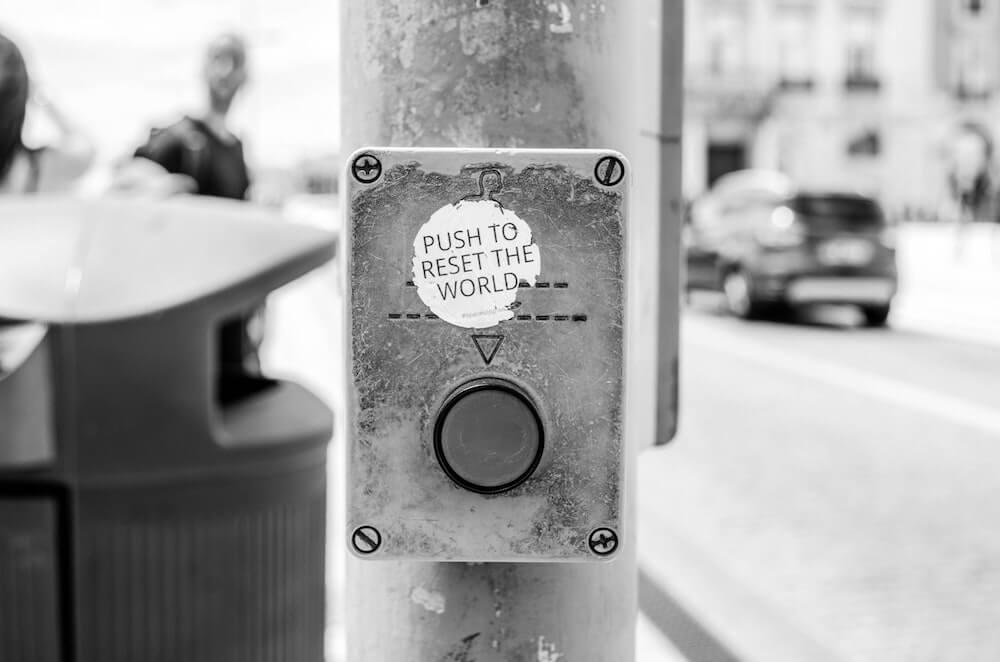 Recently we’ve all been spending a lot more of our time on video conference calls from home. I’m sure that, like me, you find yourself needing to mute your microphone and turn off the camera frequently. Perhaps something you can’t control is going on in the background, or someone needs your attention for a moment. Perhaps you are having a sneezing fit or something’s boiling over on the hob.

With the popular video conferencing service Zoom, there’s no single “I need privacy now” button that will both mute the microphone and turn off the camera. You need to become proficient at hitting (on a Macintosh) Command + Shift + A to toggle the microphone and Command + Shift + V to toggle the video camera. I set out to see if I could build a single button custom keyboard that would do this for me, and to do so in a way that would make it easily customizable for other purposes.

Let’s take a look at how to make one, starting with the hardware…

I really enjoy building things that use arcade buttons, as they’re very satisfying to press, super durable and some even have LEDs inside them so you can use them as an input and an output. I’ve previously built a weekly task tracker box with Arduino using these, as well as a game with a Raspberry Pi. For this project I decided that something with a really good click sound when pressed was better than a flashy LED, so I reached for a pile of older arcade buttons that I had kicking around. These use a microswitch so make a very satisfying mechanical noise when pressed. Here’s the one I had on hand:

If you don’t have one of these, you can get them from eBay or many other online arcade parts stores. Some places sell the microswitches separately, just be sure to get both the button and a microswitch to slot into it as the button won’t function without the switch. Any type of button switch will work for this project though! I’ve put a shopping list at the end of this article.

On its own, a microswitch or arcade button isn’t going to be understood by a computer as a keypress… we need to trick the computer into thinking it’s got an external keyboard attached, then have the button press send the right sequence of key codes to trigger the desired action. Luckily, we don’t need to build our own keyboard logic board type thing, as Adafruit makes something called the Trinket M0 which costs $8.95 and can handle all of that for us. Here’s what one looks like (they’re very small, this image from Adafruit is magnified):

If you get one of these, be sure to get the “M0” model (Adafruit product 3500) and not the regular older Trinket $6.95 (Adafruit product 1501) - this one uses older USB logic and won’t work as a keyboard with many computers any more.

The Trinket M0 is a tiny Arduino compatible programmable board that can be programmed with Circuit Python or in C using the Arduino IDE. I used the latter as I’m more familiar with it, but you could totally do this project in either language. The features of the Trinket M0 that we’ll be relying on for this project are:

Soldering this up is a little tricky as the Trinket is very small, but take your time and don’t forget you can always remove the solder and try again! Here’s what it looks like when done… I used black for the ground connection and red for the live one, but it’s the same single core wire inside both.

Don’t forget to push the wires through the holes in the Trinket before soldering them on, then clip any excess wire with pliers aftwerwards. If you need help with this technique, Sparkfun has a good tutorial. We’ll find out if the circuit works later, when we come to write software for it…

In the image above I have the Trinket connected to a USB power source, just to check that it powered up and worked after soldering, and that I hadn’t fried it :)

Finally on the hardware side, we’ll want to put the button and the Trinket in a sturdy enclosure, so that we can hit that button hard when we need to get out of a situation on Zoom! As the Trinket will connect to the computer using the USB cable, we’ll need something we can make two holes in - one to mount the button, the other to let the USB cable pass through. As we’re also going to use the Trinket’s multi-colored LED, the enclosure should be somewhat translucent, so it acts as an LED diffuser and lets some light escape.

Looking around at what I had handy, I figured a reusable Starbucks hot cup (available at any Starbucks) would do. I drilled a hole in the top with a forstner drill bit, and attached the arcade button using its screw collar. I then drilled a smaller hole in the bottom to allow the USB cable to enter…

Any enclosure that you can make work will do of course!

To make this a really flexible project, I decided that I would write some software to run on the computer as well as on the Trinket… Why is this necessary, the computer should be able to accept keystrokes and that’s all we need right?

We could build this so that when the arcade button is pressed, the Trinket sends the key commands for toggle audio on Zoom (Command + Shift + A) then sends the key commands for toggle video on Zoom (Command + Shift + V). This way, we don’t need any software on the computer (assuming the computer is a Macintosh as we’re sending Mac OS key sequences - Windows users you’d need to swap in the equivalent Windows key combinations). This is a nice simple approach, but there’s a few downsides:

What I decided to do was always have the Trinket emit a special and unused key sequence whenever the arcade button was pressed. I then built some Mac specific software and configuration that allows an AppleScript to run whenever this sequence of keys is pressed. This buys the flexibility of unlocking the power of AppleScript. With AppleScript I can add logic there to deal with things like checking an application is running, start it if necessary, do something else if it isn’t etc, as well as sending it key presses.

With this in mind, I decided to try and build something like this:

I decided not to worry about the case where the Zoom application is running, but isn’t actively in a video call at the time. All that happens if the button is pressed in this scenario is that Zoom ignores it.

Let’s check out both of these now.

Software for the Trinket Board

The Trinket M0 can run either Arduino IDE (C) or Circuit Python code. I went with the C option as I am most familiar with it. Adafruit provides excellent instructions for setting up the Arduino IDE and selecting the right board type etc.

The sketch for the Trinket needs to do the following:

Here’s my final Arduino sketch that accomplishes all of these goals:

Like all Arduino sketches, this has two main functions:

Let’s take a look at how this works at a high level:

Software and Setup for Mac OS

There’s a couple of distinct pieces here… an AppleScript and some operating system setup using Automator and Accessibility features in Mac OS.

The first thing I worked on was the AppleScript. It’s easy to test this without the arcade button hardware as you can just run it from the Mac OS Script Editor application. The hardest part of this was working out what the “name” for the Zoom application is, turns out it is “zoom.us” which is what it shows up as next to the Apple icon at the top of the screen when it’s running:

This checks if Zoom is running, if not it has the Mac say that it isn’t. If it is, then it activates Zoom and sends it the keypresses to toggle the video and audio. Sadly Zoom doesn’t have specific key presses for turning audio on and off, so toggle is the best we can do here. A true “panic switch” would always turn them off no matter how many times you pressed it :) … Well actually, it turns out that Zoom changes the text on one of the menu items when you are muted and this can be used to determine the call state from within an AppleScript… a couple of readers provided enhancements to my script that handle this condition, making a real kill switch. I’ll provide links to this at the end.

This AppleScript runs whenever the Mac receives the special key sequence that’s generated by the Trinket when the arcade button is pressed. We need to save this AppleScript as an “Application”, so that we can call it from Automator later. Details of how to do this can be found in a linked article further down…

If we want to use the arcade button to trigger different actions, it’s now a simple case of changing the contents of the AppleScript to do something else… The possibilities here are endless, we could implement a very long and complex sequence of events and logic that can control almost anything on the Mac. The rest of the configuration (Automator and Arduino sketch on the Trinket) won’t need to change.

Next up we want to configure the Mac so that it automatically runs our AppleScript when the special key combination that the Trinket generates is received. We’ll use the Mac OS Automator application.

The steps involved are:

This process could be a whole article of its own - fortunately it’s all documented in this article on addictivetips.com which walks you through it all. I used this when setting mine up and it’s worked great. For Mac OS Catalina you may get asked to confirm that you want Automator to have accessibility permissions the first time you press the arcade button, so be sure to test it before you need it in that Zoom emergency!

Here’s a demo of the final setup working its magic…

Stuff You Need to Make One

Thanks for reading, hope you found this fun and maybe try to make something similar for yourself! I’ve put my code into a GitHub repository that you’re free to use as you see fit.

Enhancement: Thanks to the Community!

One of the great things about open source is that people are free to take your work and improve on it… a couple of readers noticed that my AppleScript could be made better by checking the text of one of the Zoom application’s menu items as this changes when the audio is muted. The same can be done to determine camera status. This then allows for a real panic button that, no matter how many times you press it or what state your microphone and camera were in, will always result in you being muted and off camera.

Mike Garuccio contacted me from Cleveland, Ohio to share his AppleScript improvement, which you can see here:

I also love that people made their own versions of the hardware that are cooler than mine, check this out from Enrico in New Mexico:

Created a little Zoom meeting panic button. Thanks to @simon_prickett for the tutorial. https://t.co/0bCTAtcLA9 pic.twitter.com/mg0HJUmiep

If you’ve taken this project and made your own version I’d love to hear from you!

Another fun project that uses a lot of the same components and ideas is this Trinket powered foot switch. I also found this article very useful.