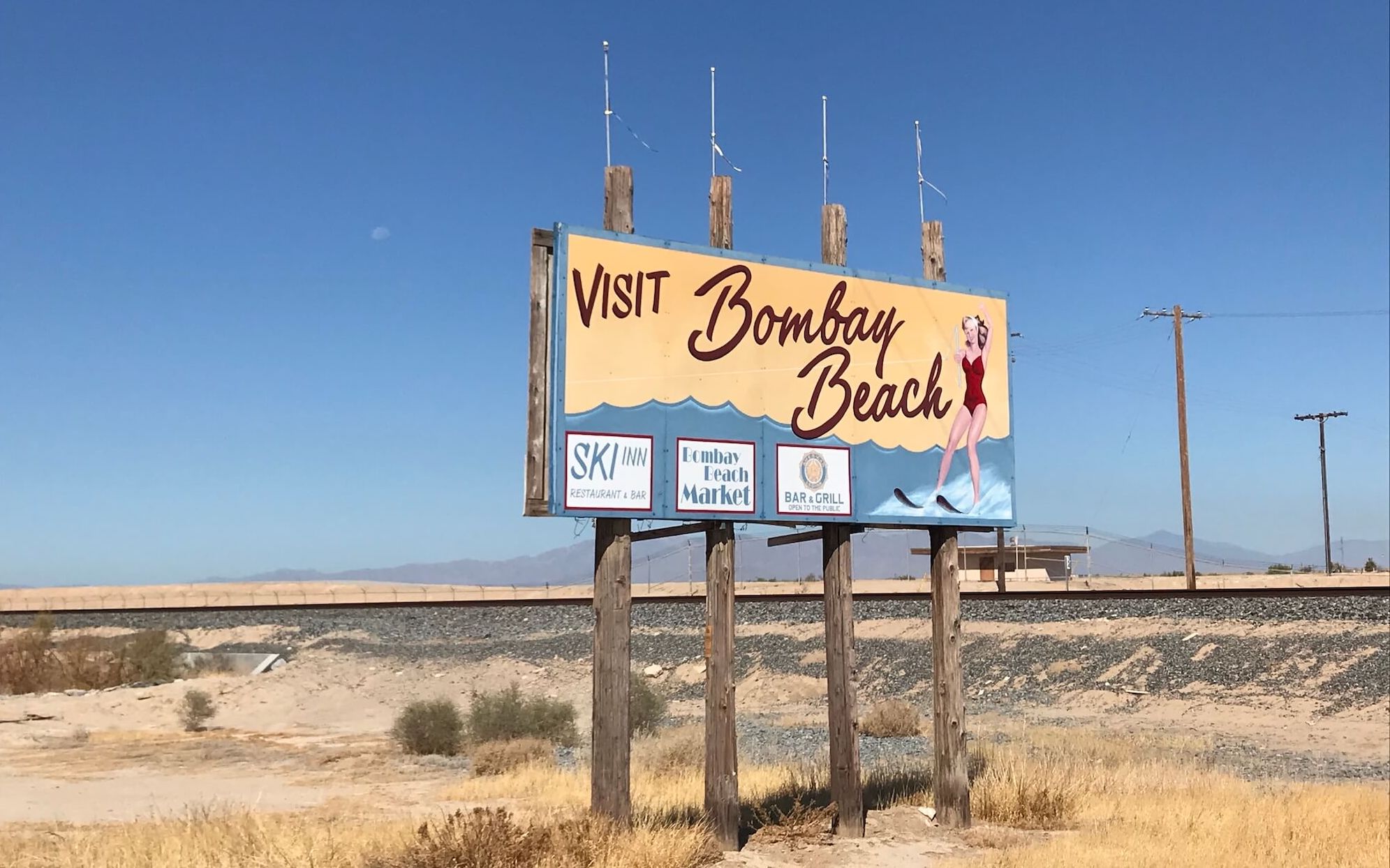 I got in the car, and did a 375 mile round trip to the Salton Sea and back! To break the monotony of being in the same place since March, I decided to take a day trip East to the Salton Sea - somewhere that I’ve been to many times before, but not recently. Normally, I would avoid the area in the May-September timeframe due to the heat out there but given the way things are going this year, it seemed best to live in the moment and just go rather than wait for the cooler part of the year as who knows where we’ll be by then…

A little background - the Salton Sea is an accidental rift lake sitting in the Colorado Desert on the Southern end of the San Andreas fault. It’s at an extremely low elevation, the water surface being at around 236 feet below sea level. The current Sea was created when an irrigation cut in the Colorado River overflowed in 1905, pouring water into what had been a dry lake bed. This overflow continued for a couple of years forming California’s biggest lake which reached about 15 miles wide and 35 miles in length. It has become an important habitat for migrating birds, and also has interesting geological features such as mud pots and mud volcanoes.

The water is very salty, salinity is increasing as more water evaporates exposing more and more dry lake bed. As the primary sources of water feeding the lake now are agricultural runoff from the Imperial Valley and occasional rainfall, incoming water contains a lot of nitrates and other pesticides. As the water evaporates and becomes more saline, the oxygen levels in it drop, causing the millions of Tilapia fish that were added to the lake for sport fishing to die off en masse. This, plus algae blooms, causes bad smells from the Sea that affect the local area and wider Coachella Valley.

If you want to see a good documentary about what’s happening around the Salton Sea, and meet some of the locals that remember when the area had busy towns and huge volumes of tourists, check out KQED’s “Plagues and Pleasures on the Salton Sea” below. It’s a little old now, but still relevant.

The Verge wrote about the growing dust storm issues as the Sea dries out back in 2018, this article provides some background on that.

Getting up early to beat the heat, I decided to take the fastest route to Bombay Beach, which is a small town / former water skiing resort on the Eastern shore of the Sea. From San Diego, this meant taking Interstate 8 for around 100 miles to El Centro and then heading North East through small towns of Brawley, Calipatria and Niland. Niland is the closest town to Slab City, a well known off grid / no rules community. I’d been there a few times before, so didn’t stop today.

The town of Niland is getting more and more run down as people leave and buildings are vandalized and not maintained. If you watch the Plagues and Pleasures documentary video that I embedded earlier in this article, you’ll see Gaston’s diner which was closing down at the time of the documentary. That appears to have been demolished now and all that remains is the sign. Several more stores are gutted, and I saw very few people.

As you leave Niland to head North up the Eastern shore of the Salton Sea, the freight railroad tracks are next to the road. I like to stop here and watch the huge freight trains pass by, but didn’t have time for this today. This video I found shows what they’re like, particularly at sunset when you can see the Sea and the mountains too (I set the video to start at a time where you can see this):

I drove to Bombay Beach from Niland, and passed through the immigration checkpoint that Border Patrol operate on the only road between the two - you drive into an open barn style building and they ask you questions and / or check the car. As there was no traffic around, I was thinking they might spend some time talking to me, but I just got asked where I was going and waved on.

Bombay Beach used to be a celebrity resort town in the heyday of the Salton Sea. It is a small town that lies at 223 feet below sea level and nowadays has a population of fewer than 300 people. The Sea rose and flooded much of the town, leading to the construction of a large sea wall berm that now blocks any view of the water from the town itself. Since then, it’s been in decline with many people leaving, often abandoning houses they can’t sell. These have mostly fallen into ruin now. The town has a couple of small market type stores, and the Ski Inn, the lowest altitude bar in the Western Hemisphere.

I drove the car up through a gap in the berm to what, when I first went there in 2016, would have been parking at the waterfront. In August 2020, the Sea was a long way from there, and because it’s a lake this isn’t because the tide was out… lack of inflow to the Sea and evaporation have dried it out. Because the Sea is so shallow, a little bit of evaporation causes it to recede a relatively long way.

The “beach” area is now a dusty dry lakebed, a lot of which is made up of ground up fish skeletons from the fish die offs. Here’s some pictures showing the current “waterfront”:

As property prices have cratered and people left, new people have seen opportunities to use Bombay Beach as a sort of canvas for their art. Several artists have bought properties and turned them into art installations, or build sculptures or similar on abandoned empty lots. There’s a Bombay Beach Biennale art festival (that happens annually) where lots of new things appear. The Guardian wrote a good article about the growing art movement that you can read here (free registration required).

I hadn’t visited for almost a year, so I took a drive around town and shot some photos of the art installations, which vary from small piles of painted rocks to huge building size sculptures. Here’s some pictures…

I particularly like that Bombay Beach now has a Metro station, so convenient!

After spending a while looking at the art installations of Bombay Beach, I got back in the car and drove a bit further North to the Mecca Beach campsite which is part of the Salton Sea National Recreation Area. This area has a $7 day use fee, and provides toilets, showers, BBQ pits, shaded picnic tables and camp sites with and without hookups (additional fee). I paid (do this even though the gate is usually unmanned, they need the money and Rangers do perform spot checks and will fine you), parked next to a picnic table and got my gas burner out to boil water for Aeropress coffee then boiling hot dogs for lunch :) Here’s some pictures I took from this location:

There’s usually a few more beach locations open, but due to the pandemic it seems Mecca Beach is the only one at the moment. This wasn’t an issue from a social distancing perspective as there was barely anyone there. I really enjoy looking out over to the mountains across the Sea from here, it’s a real shame it’s disappearing so fast and that the dust storms are getting worse.

In order to get home to San Diego before it got too hot in the Imperial Valley, I didn’t stay too long after eating and set off home via a fuel stop at a Pilot service station in Brawley. Fuel’s cheap out there, at least relative to what I’m used to seeing in San Diego, so I filled up and headed back to Interstate 8 West.

On the way home, I realized that I’d done a few more miles than anticipated, and that the car would reach the 200,000 mile milestone on the way home. My 2003 Honda Element is the highest miles car I’ve ever owned and this is the first time I have taken a car across the 200,000 mile boundary (I’ve taken several through the 100,000 mile mark). Luckily this happened close to an exit on Interstate 8 near Mount Laguna so I was able to pull off and take a picture :)

The only other entertainment on the way home was getting stopped at the Border Patrol check on Interstate 8, but they just took a look at me and the car and waved me on my way this time. I saw very little traffic the whole trip, but I guess it was also a Sunday morning.

The car performed fine in the heat all day, and got me home without any trouble. I didn’t stress it by using the air conditioning until I was on the San Diego city side of the mountains on the way home though, had the windows down for air flow for the rest of the trip. It was really nice to get out and do something different after so long in the city and surrounding area. Whilst I normally wouldn’t have gone to the Salton Sea in the height of summer, it worked out OK after all! Not sure when I’ll be back there, so made sure I took pictures and soaked in the atmosphere on this trip.

A week after my visit, there was an earthquake swarm around the Sea and as I’m writing this there are flash flood warnings for the area there too. It was a very dry heat the day I was there, but the desert is a place of extremes and things change quickly.

If you make this trip, I’d encourage you to travel through the back roads in the mountains in one direction and visit the town of Borrego Springs, home to the Galleta Meadows sculptures. This route also takes you through the Anza-Borrego Desert State Park.

It was good to get out for the day and do some exploring, hopefully I’ll get the time to do something a little further afield again soon!

Have you been to the Salton Sea? Let me know in the comments!