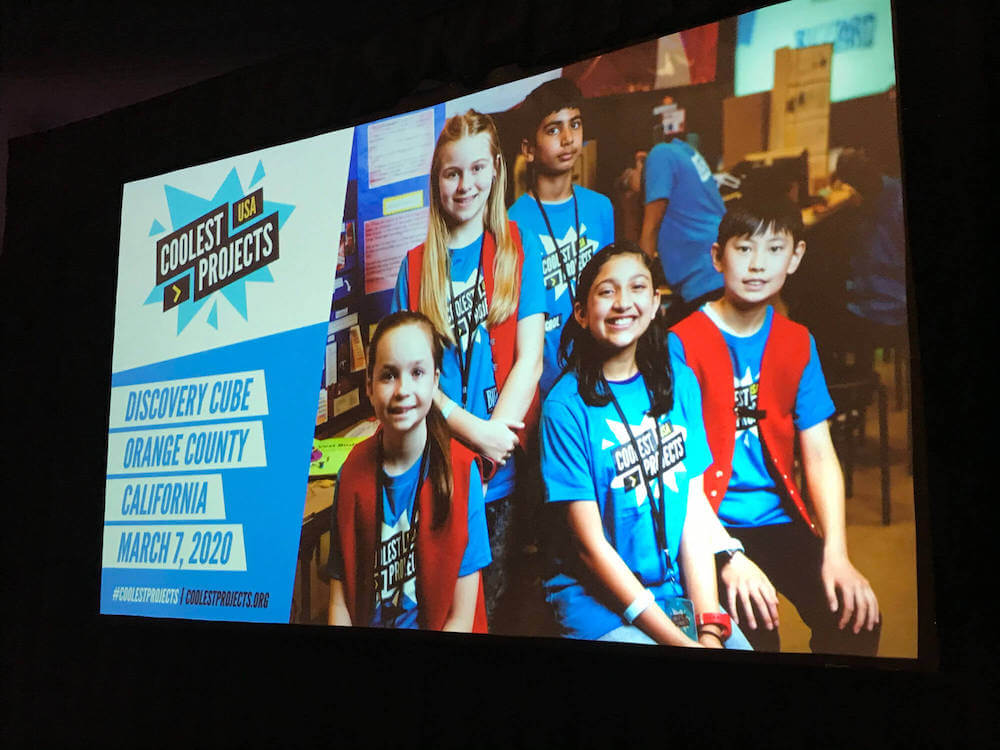 Today I traveled from San Diego to the Discovery Cube in Santa Ana, California to check out this year’s Raspberry Pi Coolest Projects USA event. This is a one day Raspberry Pi Foundation event that they describe as follows:

Coolest Projects is the world’s leading technology fair for young people. It’s the science fair for the digital age, where thousands of young people showcase amazing projects that they’ve built using digital technologies. If you want to meet the innovators of the future, this is the place to be.

Tickets were free on Eventbrite, and as with the previous year, the event was held upstairs in the Discovery Cube’s Theater / Exhibition Hall. This is a large single room with a stage and cinema style projection screen.

The room was organized into rows of tables, with projects organized by type - for example Visual Programming for those using tools like Scratch, Games projects, and Mobile. Many of the young creators had undertaken projects that used both hardware and software. I saw several with various sensors and LEDs as well as some robotics ones including a really well done accessible chess board game that moved the pieces for players who weren’t able to do it for themselves. One group showed me how they code patterns for embroidery machines to work with, and another had wearable augmented vests that they’d built and added sensors and LEDs to. As expected, most projects were using the Raspberry Pi but I did also see a number that included Arduino and BBC micro:bit too.

As well as building and coding their projects, the kids had produced leaflets and display boards showing how they worked. I watched the judges go around talking to each competitor or group in turn.

Outside the main room, they had six or so Raspberry Pi stations set up with keyboard, monitor and mouse so that people could just try them as computers using the desktop version of Raspbian. As I rarely install this on my Pi collection (I nearly always go with the Lite version and SSH in), I hadn’t seen the desktop experience in a while - it’s pretty slick now. They had them each set up with the Sense HAT so that people could try coding for that in Python using instruction leaflets provided. The most popular exercise seemed to be making random pixels on the 8x8 LED matrix light up different colors.

While looking at these “have a go” stations, I spotted Eben Upton (a founder of the Raspberry Pi Foundation) a couple of times - looked like he was one of the project judges for the day.

I wasn’t able to stick around and wait for the judging and presentations, so I’m not sure whose projects won awards, or what if anything the prizes were. I’m sure that will appear online in due course and I’ll update this article with a link when it does.

Overall this was a fun time out, and it’s really interesting to see what ideas the young makers came up with and how well they executed them and were able to talk about how they worked. I came away with some ideas, and a few more Raspberry Pi stickers as well :)

The next Coolest Projects event will be held in Dublin, Ireland on June 6th 2020.