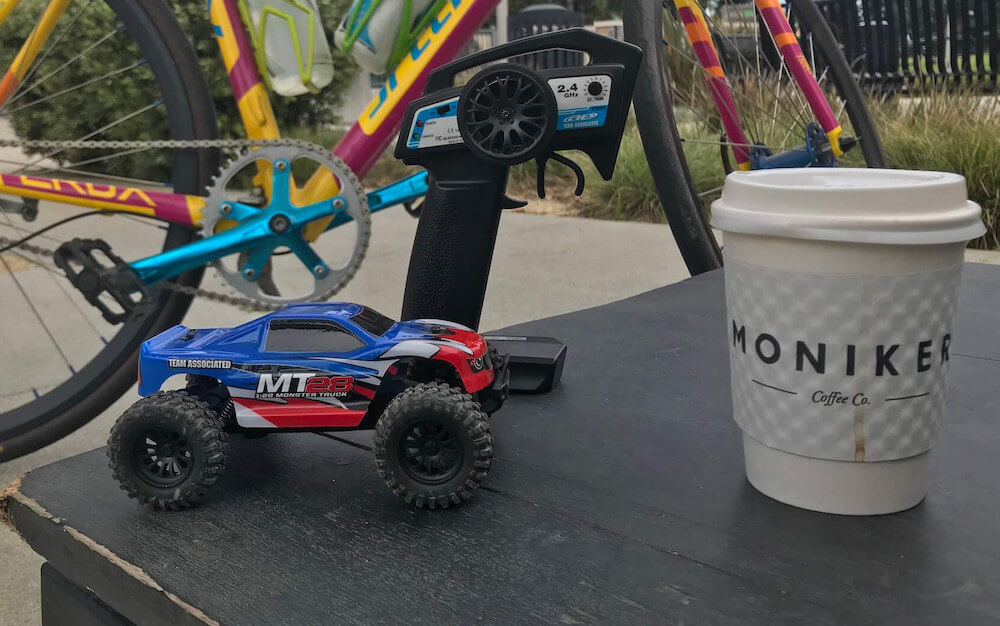 I’ve long been interested in radio controlled cars, and have built and raced them to quite a high level several times before although not recently. Today I decided to take one out on a bike ride to try and capture some footage of me driving it just for fun, and to have something to edit later to pass some time.

I bought myself a Team Associated MT28 1/28th scale truck a little while ago as a present, but hadn’t used it for a heck of a lot yet, and it had never been outdoors. Team Associated has a few of these little cars, they’re all the same chassis with different bodywork and wheels. I really like the look of the RC28, which is a small scale clone of their classic RC10 buggy that I remember from when I was a kid.

These cars have a recommended retail of $79.99, but you can expect to pay $55 or so for them. I picked mine up at local hobby store Ampdraw Hobbies in Encinitas, CA a while back. Amazon has them, or you can buy from Team Associated direct. Obviously at this price point, the car is pretty simple - rear wheel drive, no differential, no independent suspension. However, they do have proportional steering which is a bit of a rarity in these cheaper small cars. There’s a reverse gear as well. Also, being from Team Associated, there’s a full range of available spares should you break anything.

The car is built for you, all you need to do is put 4 x AA batteries (provided) in the transmitter unit, and charge the rechargable LiPO battery in the car… this charges from the transmitter using a cable provided, or you can get an optional USB charger (I have this, and recommend it).

Today, I took mine out for a bike ride to Liberty Station in San Diego, bought a take out coffee from Moniker Coffee there, and had a drive around. I used a couple of rocks to prop up my iPhone 7, and took some video too.

The fun thing with driving these cars outside is that they’re so small compared to the rest of the real world - a small stone or imperfection in the ground can cause a huge wheelie or the rear wheels to fly up in the air while the fronts stay grounded. The other great thing is the tight turning circle, so you don’t need much space to make some sort of a fun course. They will tip over if you try full lock steering at full speed, so some skill’s needed to take corners quickly. This is especially true on loose ground where the car’s really skittish due to its light weight and the relatively large size of gravel etc. I don’t think these would work on grass at all, you’d just get completely bogged down!

I had a lot of fun driving on paved and loose surfaces, enjoyed a couple of coffees, then cycled home and edited the footage together with iMovie on the Mac and uploaded it to YouTube. Check it out…

I’m thinking of doing more cycling / hobbies other than coding and electronics posts here, feel free to let me know what you think in the comments! Also if anyone wants to get me a RC28, it’s on my Amazon wish list :)