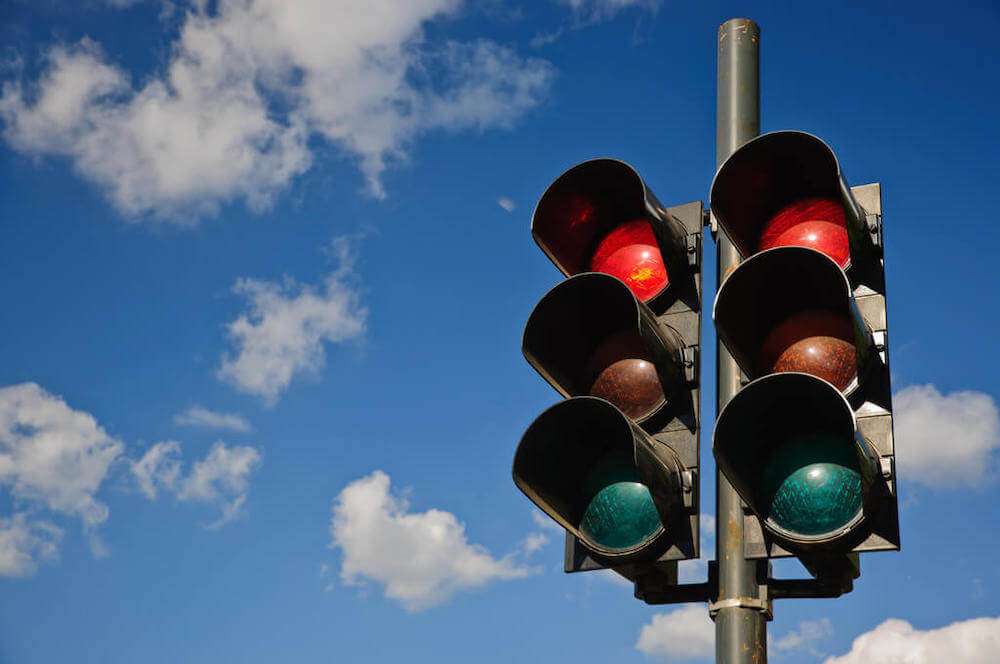 This is the third of our articles in a series where we’re playing with the Low Voltage Labs LED Traffic Lights using Python on the Raspberry Pi. In the first article, we set up a basic traffic light pattern, then enhanced this in the second article to run the lights in either the UK or USA patterns according to the value of an environment variable.

This time, we’ll look at restructuring the code to use a Finite State Machine, so let’s go…

A Finite State Machine (sometimes known as a Finite State Automaton) is a computing model of a theoretical machine which can be in exactly one state at a given time. The machine will have a known (finite) number of states, with each state having one or more transitions to a new state. Modeling traffic lights is a simple example, but one that is often used in teaching materials to introduce the concept to students.

In order to figure out what our states and transitions are, we can draw out a basic state diagram to visualize them:

From the diagram, we can see that the traffic lights have five distinct states, each with a single transition to the next state, and that the state machine enters an infinite loop:

To make our code read better, we’ll introduce a couple of convenience classes… the first allows us to name all the states:

And another allows us to give the GPIO pin numbers for each light on the traffic lights more meaningful names:

In this case, we have a very simple set of states and transitions, so we can just use an if / elif / else statement to build out the Finite State Machine. This wouldn’t scale well for more complex models, but is fine for traffic lights.

First up, we need to keep track of which state the machine is in at any given time… we’ll do that with a variable currentState. At the beginning, this is set to the first state that the machine enters when “booted”:

Then the bulk of our code becomes an infinite loop, in which we:

If we apply the above rules to each of our states, we end up with:

To make each state self-contained and not dependent on a prior state, we’ve added code to explicitly turn each LED to the required on or off status for each state. This means that should we choose to run the lights in a different order, we just change the code that sets currentState, without changing the actual implementation of a state.

When set to operate using the UK pattern, the lights will cycle as follows:

And with the USA pattern, expect:

In this article, we changed the way that the traffic light code works to incorporate a Finite State Machine. Whilst this is a very simple example, Finite State Machines have a great many uses in programming — you’ll find them used in compiler implementations, game development, and in some of the C language firmware for connected thermostats that I’ve worked on before.